This early medieval Armenian architectural monument is situated in Ptghni village, in the center of archaeological spacious area. It was built by Prince Manuel Amatuni in the VI-VII centuries. It has a structure of a domed hall with a pair of pilasters. Only the northern wall, the eastern part of the southern wall and the domed arch of the destroyed temple have been preserved. The temple was lightened by a large number of wide windows. The temple had 3 luxuriously decorated 3 entrances- the northern, the southern and the western.
Ptghavanq is famous for its rich decoration –its ornaments and sculptures with vegetal and geometrical motives. The sculptures are unique- horseback Manuel Amatuni throwing a dart to a lion which is situated in the left- central part of ornamented arch of the southern entrance and the sculpture of Sahak Amatuni fighting against a lion which is situated in the right side. In the center of the southern entrance’s arch the sculpture of the Virgin in medallion with angels from 2 sides, the cornice with the sculpture of jugs and with the sculpture of a lion sitting under a palm tree is also remarkable.
The sculptures of Ptghavanq are one of the valuable and unique creations of the early medieval Armenian architecture.
On the polished stones of the temple a lot of marks of the masters have been preserved.
In 1930-40s the partial restoration works of Ptghavanq have been carried out regularly. 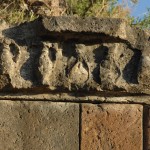 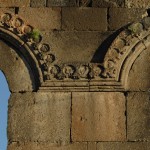 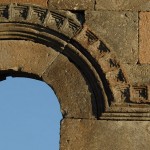 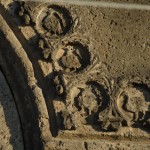 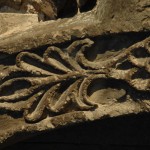 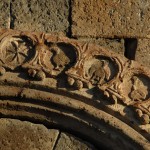 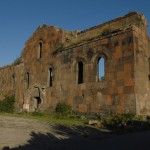 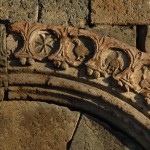 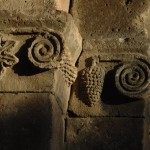 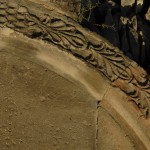 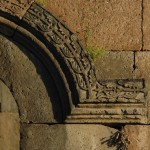 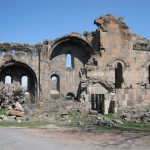 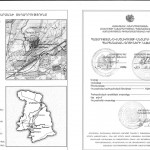 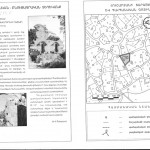