Karmravor St. Astvatsatsin (Karmravor) church is situated on the north-eastern side of the Ashtarak city, not far from the old Berdatagh on the high hillside. It is a small building with harmonious proportionality. The date of the construction of the church is unknown. There is no evidence in the literary sources either. By its compositional solution and architectural details, it is a 7th century building, which reach us nearly unchanging and standing. It is of single dome altar type having four wing layouts and having the only vestry on the east. It is built of brown and red tufa stones. From inside the church is decorated with frescos, among which there are compositions of “Christ in Glory” and St. Horsemen with arm inscriptions depicted. The decorative ornamentation is restrained and is in harmony with architectural.

The fact that the church was not large (6×7.5 m), the simplicity of decoration assumed that this was a vault of princely family. It was also a nunnery monastery and functioned till 1813.

The church is surrounded by walls of polished tufa stones built by Asnavur and Ghutalchak spouses in 1326. The inscription has been preserved on the lintel of southern door and on the left wall chapel of St. Marine church in Ashtarak city. The walls retained till now being partly repaired.

There is a medieval graveyard with khachkars (cross-stones) and gravestones of 13th – 17th centuries in the court of St. Karmravor church. The oldest khachkar (1184) is of Arkakazmogh. Only the pedestal and five-line inscription remain to us.

The works of providing amenities and reconstructing of the monuments were done in 1956. During these works the tumbledown chapel adjacent to the church from the west was removed. The latter was unfinished construction, which only distort the appearance of the medieval monument.

Stepan Mnatsakanyan, Yerevan and Its Surroundings, Yerevan, 1971 (in Armenian). 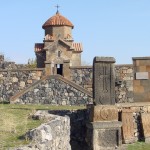 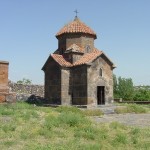 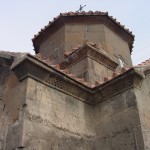 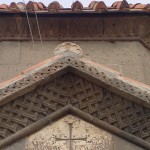 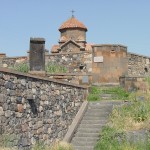 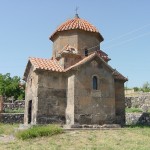