St. Trinity church is one of the monuments of Armenian Architecture of Early Middle Ages. It is situated on the left riverside of Akhuryan River, 5 kilometers west of Aragats village in Talin region. On the basis of the analysis of the architectural peculiarities the church is dated to the 6th century. The church is of centered dome type with many apsis. It has six horseshoe-shaped apsis, with triangular niches linked by an arch. The church has multi-stage plinth wall, horseshoe-shaped arches, three cornered pediment entrance with pilasters of which only the tracks remain. The only entrance is from the south-western side. It is built of yellow and red polished tuff stones. The only decorative ornamentation is the jagged two-step cornice crowning the drum. On the crown of northern window of the church drum the name of the architect Grigor is engraved. This was the reason to call the church Grigorashen. Among thirteen churches having six apsis known in Armenian architecture St. Holy Trinity church is the only one which is standing nowadays. 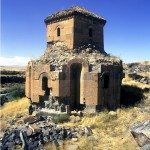 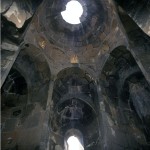