St. Hovhannes church in Mastara village is one of the most notable and original distinctive churches of the Armenian architecture of Middle Ages. It is situated in the centre of Mastara village. According to the building inscription on the western facade, the church was built in the 7th century by Grigoras monk. There are different viewpoints regarding the dating of the church. Some specialists think that this inscription refers to the reconstruction of the church in 7th century, while the architectural-building features and the ancient architectural style of the church are characteristic for an earlier period – 5th century. St. Hovhannes church is of centered-dome type and with four apsis. The worship hall is tetragonal. The huge dome with octahedral drum is rising on the three-level tromps. The three of the apsis are horseshoe shape from inside and pentahedral from outside. On the two scales of the main apsis there are vestries. The entrances are from the western and southern apsis. It was built of brown and violet large stones by its origin, and later was renovated with orange and yellow stones in the 7th century. The church was reconstructed in the 10th-13th centuries. In the Late Middle Ages the church was surrounded with walls which were ruined in 1889 during the reconstruction.

St. Hovhannes church is especially valuable for the perfect solution of its internal space. The harmony of cubage, the large dome and the tromps carring it gives a majestic view to the interior space.

The decoration of the church: the central-winged crosses of the straight arch, the graphic sculptures of the cherubim, the cross sculpture with couple of birds, the high-reliefs with pigeons on the vaulted crown are typical of the Armenian architecture of Early Middle Ages (5th century).

The Mets church in Artik, St. Astvatsatsin in Voskepar, St. Grigor of Harichavank monastic complex, and St. Arakelots church in Kars are built using the plan of the church of Mastara. 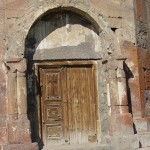 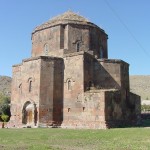 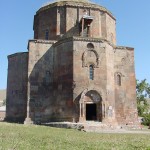 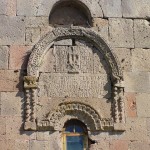 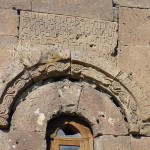 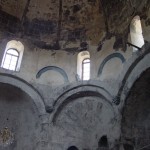 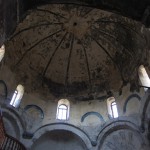