Aruch temple is one of the most famous monuments of Early Medieval Armenian architecture. It is situated in the eastern part of Aruch village. According to the literary data and epigraphic inscriptions about building of the church (preserved on its eastern façade), Grigor Mamikonyan together with his wife Heghine built the Aruch temple in the 60’s of the 7th century. The church is of domed hall type. It is erected on the three degree socle. It has 16,95 x 34,6 m size chapel, dome with sailing transition (now ruined), on the both sides of eastern sacristy there are vestries with two windows and upper lurking place.

Though being without dome the temple dominates with its splendor over the surrounding vast panorama. St. Grigor church by its measures is the largest among Early Medieval domed hall churches. Entrances are from north, south and west. The cathedral is made of black polished tufa stones. The temple is also remarkable for the unity of its external and internal architectural and stylistic solutions. The external ornaments are done according to principles of the Early Medieval Armenian architecture: there are many large windows, “Armenian niches” on eastern facade, arches decorated with sculptures, weaved like cornices. The Aruch church is notable in the Armenian architecture for its frescos, which are one of the best examples of the Early Medieval Armenian monumental painting. The great and too bright internal space makes the frescos solemn and noble. From the former rich frescos only pieces are preserved, which give evidence of the executive mastery of 7th century painter Stepanos.

During the excavations of 1947-1952 (directed by Varazdat Harutyunyan) the ruins of Grigor Mamikonyan’s palace and basilica of 60s of 7th century situated in the north-east of the temple were found. 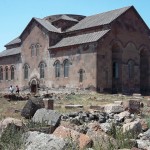 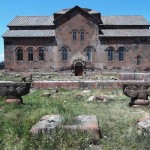 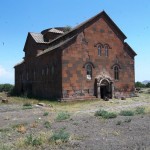 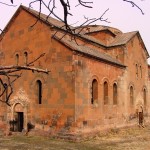 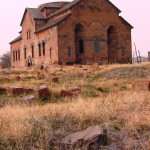 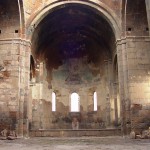 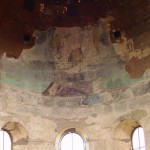