This famous monument of Early Christian Armenian architecture is situated in the centre of Aparan city. It is considered that it was the royal chapel of Archakunyats’ palace. The complex includes the main and ancient church of St. Khach (Cross), later built portico and a single nave basilica.
St. Khach church is a three-nave basilica with rectangular composition and the church is divided into one large and two small lateral naves which are under double-breasted roof separated by two horseshoe shaped arcades. The eastern apsis is horseshoe-shape from inside and pentahedral from outside. The church has three entrances: two on the south and one on the west. The sacristy having rhombus plan was built in the north-eastern corner of the church in Early Middle Ages. The monument is built of black and gray large tuff stones. The ornamental solutions on the lintels of portals of western and southern facades are the best examples of the Armenian sculpture of Early Middle Ages.
During the excavations of 1944-1947 (directed by A. Sahinyan) the three-story plinth-wall, the remains of vaulted gallery later adjacent to the temple from north and the main walls of the one nave vaulted basilica with horseshoe-like apsis adjacent to the vestry from the north were found. The numerous details and fragments made possible the reconstruction of the general appearance of the monument and to form the reconstruction project of this notable monument of Early Middle Ages. One of the ornamental capitals of Qasagh basilica is now situated at the History Museum of Armenia. St. Khach (Cross) church with adjacent sacristy was completely reconstructed in 1980-1990 and is functioning from 1996. 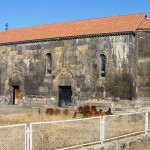 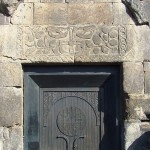