Saint Gevorg Monastery of Mughni is located in the southern edge of Mughni village. According to the historian Zaqaria Sarkavag (17 century) the monastery was founded by the Congregation of Hovhanavanq. It probably was taken place in the 1st half of 13 century, because in 1278 a manuscript was already copied in Saint Gevorg Monaster. In 13-15 centuries manuscripts were written here. The monastery has become a famous sacred place. The monastery flourished in 17 century, when the complex was completely reconstructed for the second time. In 1632-55 Bishop Martiros (the primate of the monastery) destroyed the dilapidated church, other buildings and built new ones – 3 nave basilicas with 2 pairs of struts, walls and cells. However, in 1664 Hovhannes priest completely destroyed it and in 1664-69 built a new one from smoothly hewn tuff stones

The architecture of the monastery’s Saint Gevorg church is Sahak Hizanetsi /1666/, after his death he was replaced by his student Usta Murad. Saint Gevorg monastery of Mughni was partially reconstructed in 19th century. In 1830 the roof was reconstructed, then in 1839 – the steeple of the dome which was damaged by lightning. In 1870 a school was founded there. In 1895 the second floor of the living room in the northeastern side was built. A small building of the spring is in the northwestern side of the complex combined with the reservoir. The vaulted dinning-hall and store-room are adjacent to the eastern wall. In 2000 the monastery was reconstructed and the territory was renovated by Archbishop Mesrob Ashchyan. In October 8, 2000 the latter was anointed by the hand of Catholicos Garegin II.

The church of the monastery has a 4 pylon domed basilica structure which was built from smoothly hewn black and red tuff stones. An opened hall with 3 arches is adjacent to the church from the western side and 12 arches rotunda of the belfry rises on its middle part. In the center of a large and high pray hall the dome with the cylindrical drum and umbrella-shaped calotte rises on the cruciform pilasters. On the north-eastern corner of the apse and the hall there are frescos of XIX century depicting various scenes. Multi-colors plays an important role in the outward decoration of the church: the bas-reliefs of 4 evangelists’ symbols on the drum of the dome using black and yellow-reddish tuff stones. The southern entrance is remarkable with its uniquely rich and splendid decoration.

Saint Gevorg church of Mughni is one of the best structures of the late medieval Armenia with its high aesthetic features of architectural forms. 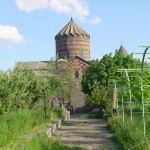 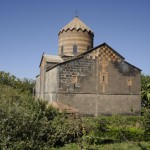 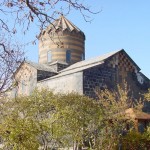