This monastic complex of medieval Armenia is situated at the south-eastern side of Yerevan, at a distance of 35-40 km, on the road Yerevana‒Garni‒Goght. According to a legend, the monastic complex was founded at the beginning of the IV c. In the early period it was called Ayrivank, as it had cave structures, and later, since the XIII c. it has also been called Geghard in honor of the saint lance. The complex was one of the biggest medieval manuscript-writing centers of Armenia. The oldest preserved monument is the chapel of the XII c., partly hallowed out of a rock, and is located out of the walls, on the western side. The principal group of monuments, formed in the XIII c., includes the main church (Cathoghike), an adjacent narthex, two cave churches, fore-church‒sepulcher, the cells, enclosed in the walls which were built in the XVII c. Geghardavank is a unique construction of rock-hewn art among Armenia’s monuments hallowed out of stone. A whole group of monuments (two medium-sized churches, a narthex /above/ and a pillared fore-church-sepulcher /below/) is hallowed out of stone. The monuments group is adjacent to the main church, and is located on different heights of the northern huge rock. There are numerous beautifully-sculptured cross-stones and cells, hallowed out of the rock, in the surroundings of the monastery.

In 2000 the complex was included in the list of the monuments under the protection of UNESCO.

Chapel — partly hallowed out of a rock, is located to the west from the main group of the monuments of the monastic complex. Several donation inscriptions, including inscriptions of the XII c. (1177, 1181), were engraved on the wall.

Main church /Cathoghike/ — was erected in 1215, during the rule of the Zakaryans. The construction inscription was engraved above the entrance of the western façade. According to its planning and volumetric-spatial structure, the Cathoghike belongs to Armenia’s cruciform, dome-carrying constructions type, typical of the XII‒XIII cc. The plan is an elongated rectangle, with an inserted cross, from right the center of which soars up the slender dome, grounded on a square base. The passage from the dome-bearing square to the curve of the drum was realized by means of the sails. The eastern wing of the cross is crowned with the semi-circular main apse, and the other wings have extended and acquired a rectangular appearance, covered with cylindrical vaults. Two-storeyed sacristies with a vaulted overhead cover have been built in the four corners of the cross wings and on the eastern side — with small apses. One can see from the inscriptions preserved on the walls that each of the sacristies was built by the means of different persons. The interior ornamentation was elaborated by the architectural art style of the XII‒XIII cc.  The drum and the southern portal are especially distinguished by skillful execution of the adornment.

Narthex (the fore-church of the main church) — was erected in the period of 1215 ‒1225. It adjoins with its eastern side the western façade of the main church, and the northern wall is substituted by a rock. It belongs to the type of centralized, four-pillared narthexes. The plan is rectangular /almost square/. Four massive pillars stand at equal distances in the center of the structure. The inner space is divided into one large (central) and eight smaller sections by arches, stretching from the four mentioned pillars up to the pilasters of the opposite walls. The central section, covered with a gracefully-sculptured vault made of stalactite, forms the basic axis of the construction.

First church — hallowed out of a rock, is located at the north-western side of the narthex of the main church. It was erected in the period of the reign of the Great Prince Avag who was the son of Ivane. The construction was carried out from the 30-40th of the XIII c. up to 1250. The plan is partly cruciform, the southern wing is almost absent (it was just impossible to built it because of the lack of place for the narthex wall). It is covered with a graceful stalactite dome, resting on cruciform arches, typical of the XIII c. It is inscribed “Remember Archimandrite Galdzag” on the dome-carrying square, above the crossing arches adorned with pomegranate ornaments. Galdzag was considered the architect who erected the rock constructions of the monastery. There is a cold spring (“Saint Spring”), flowing out of the rocks, inside the church.

Second church — is hallowed out of a rock and is situated at the north-eastern side of the narthex adjacent to the main church. It consists of a church and narthex. According to the construction inscription on the northern wall of the apse of the main church, the church and narthex were built in the period of Prince Prosh, in 1283. The church belongs to the type of domed halls. The drum, crowned with the sculpture-decorated hemisphere of the dome, rises from the semi-circular arches starting from the walls. Both the walls of the church and narthex are decorated with sculptures. The entrance to the church is through the narthex. The latter is a small construction with a rectangular plan and is probably the family sepulcher of the Proshyans. There is a sculpture of a bull’s head in the front part of the arches, created in the direction of the axis of the narthex entrance. The bull’s sculpture keeps two chained lions, and lower an eagle, keeping a ram in its claws, is depicted. It is supposed that it was the Proshyans’ patrimonial coat of arms.

Papak and Ruzukan’s fore-church-sepulcher — is hallowed out of a rock, located in the upper part of the rock. It is the sepulcher of Prince Prosh’s son Papak and the latter’s wife Ruzukan. The sepulcher was built in 1288. It is a centralized construction with four separate pillars. The sepulcher has a separate tunnel-like entrance of about 10 m. in length.

Hall — was hallowed out of a rock and was situated to the north-west of the main entrance of the monastery. It was studied in 1932, during the excavations supervised by Toros Toramanyan. Not long after the excavations, it was almost completely destroyed as a result of a rock-slide. It is a large hall (5 meters in height, 9X15 meters in dimensions) which had a secular function. Supposedly, it was a library, meeting-hall or dining-hall. T. Toramanyan wrote that all the arches, niches, pilasters, the whole cave, having a ceiling and floor, were cleanly smoothed. It was constructed in the 2nd half of the XIII c., in the period of Prince Prosh. The latter’s name is mentioned in the inscription, engraved on the western wall.

The monastery was ruined many times not only due to external attacks, but also because of earthquakes. However, it was reconstructed. It was completely repaired in the Soviet period (1934, 1940, 1960‒1961). 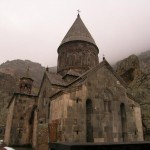 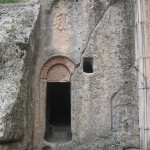 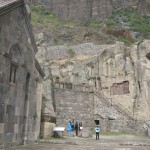 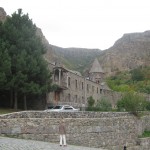 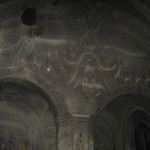 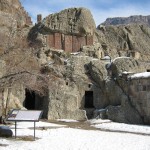 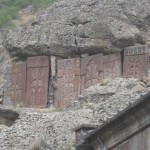 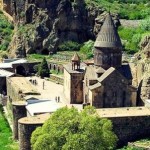