The book was authored by Levon Mkrtchyan (chief specialist of the monuments preservation department of the “Service for the Protection of Historical Environment and Cultural Museum-Reservations” SNCO), Gagik Sargsyan (Institute of Archaeology and Ethnography NAS RA), Artak Gnuni (PHD in History, lecturer at YSU, employee of archaeological laboratory) and Hayk Avetisyan (Doctor of Historical Sciences, Professor, scientific editor). The book is dedicated to the castles of the Kashatagh region of the Republic of Artsakh including examples of the Bronze Age, the Iron Age, and the Early Middle Ages. The work includes a summary of 36 castles in which the location map, the ortophotoplan, the excavations, and the floor plan of each castle were obtained using modern technologies.

Levon Mkrtchyan: archaeologist – Until September 2022 the expedition (expedition leader: G. Sargsyan) was studying the castles of the Republic of Artsakh. It was called a study program of the newly discovered fortresses in the liberated territories of Artsakh which was carried out with a grant provided by the Pan-Armenian Fund financing the Armenian Studies of the NAS RA. The studies were interrupted as a result of the war which broke out on September 27, 2020. However, we managed to study a sufficient number of castles in the territories of Kashatagh, Karvachar, and partially in the south of region Hadrut. Therefore, together with the above-mentioned co-authors, we decided to publish the results we obtained.

The book is about one of the territories that best represents Armenian fortification based on the fact that even if the whole of Armenia could lose its independence Syunik and Artsakh almost always kept their local self-government – and Kashatagh is a part of historical Syunik.

The work will breathe new life into the study of the military and landscape archaeology of Armenia and the history of Syunik and Artsakh. It can also be useful for architects. The co-author of the book is sure that the use of modern technologies in this case will facilitate the task of reorganizing the castles.

Levon Mkrtchyan: archaeologist – In 2021 in the post-war period we had undefined and disrupted borders. Winning the grant from the Science Committee we added as well the castles of the RA Syunik Marz (Region). Summarizing the results of the year it should be noted that we were able to study nearly three dozen castles. This is an important achievement and the “Service for the Protection of Historical Environment and Cultural Museum-Reservations” SNCO and the Historical Environment Preservation Regional Service of Syunik have contributed to it.

The book was published by “Nrane” Publishing House (where you can get it) under the auspices of the Tekeyan Cultural Association (TCA) of the United States and Canada. 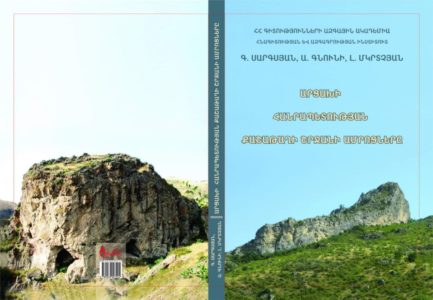