The monastic complex of Hovhannavank is one of the most famous historical-architectural monuments of 13th century. It is situated in Ohanavan village on the western edge of Qasagh gorge. The complex includes a single-naved St. Karapet basilica of 4th century; St. Karapet main church of 1216-1221; the narthex of 13th century; churchyard; obelisk monument; winged khachkar and khachkars in the walls; the buildings of school and congregation and a enclosure of monastic complex.

St. Karapet basilica is the ancient building of the complex. According to tradition the monastery was founded in the beginning of 4th century, when Grigor the Illuminator built the single nave basilica. The name of the church after St. Karapet is connected with the fact that it was one of the first Christian churches in Armenia. The church was reconstructed in 573 when the abbot Ashot Dvinetsy changed the wooden roof with masonry vault. It was also reconstructed in 1652. The western façade with horseshoe-shaped arches and frescos of external portico remains invariable. During the last reconstruction the emblem (an eagle taking pigeon in clutches) of Vachutyan princely family was imprinted in the eastern façade.

St. Karapet main church is adjacent to the single nave basilica from the southern side. The church was erected by Prince Vache Vachutyan in 1216-1221 and the construction was finished by his son Qurd. It is rectangular from outside and cruciform from inside. The church is rich for many gorgeous high reliefs and bas-reliefs: the most striking bas-relief is the one on the portal, which is decorated with plant ornaments, based on the illustrations from the parable “Wise and foolish virgins”.

The dome and the southern wall were destroyed during an earthquake in 1918 and reconstructed in 1990’s. A secret passage was coming down to Qasagh river from the vestry situated on the right from the apsis.

The narthex-chapel was built in 1250 by Qurd Vachutyan adjacent to the main church and basilica from west. The nartex having the spacious construction and rectangular plan is of four-columned narthexes (gavits) type. Likewise the main church, the narthex is striking for the richness of high reliefes. The roof is partially realized by stalactites and partially by crossed vaults and smooth stone ceilings. Twelve columns rotunda is on the centre of the roof, perhaps it was built during the reconstruction in 1274. It is a unique among other identical constructions in Armenia and has the largest (6.5 meters diameter) garret-window.

The churchyard is adjacent to the northern walls of narthex and western walls of the basilica.

The Obelisk Monumentis dated to the 6th century and is situated on the north-western side of the monastery. The three-storeyed main pedestal and one fragmental stone pedestal are polyhedral, and the obelisk is a pair of columns from a single stone which is crowned with a common capital.

The Winged Kachkar is dated to Early Middle Ages and was erected on the cruciform pedestal. Under the horizontal wings of the sculpture of the cross are plant ornaments and the two ends of the cross wings also are covered with ornaments.

The monastery was surrounded by a wall strengthened with towers. This wall was built by Queen Nana in the end of 12th century.

Hovhannavank was also one of the ancient Armenian script centers. Since the end of the 16th century Philosophies, Music, Calendar were also studied in the school of Hovhannavank. Approximately twenty manuscripts preserved to us from this script-center, and are kept in Matenadaran named after Mesrop Mashtots in Yerevan.

Stepan Mnatsakanyan, The Architecture of Armenian Narthexes (in Russian). 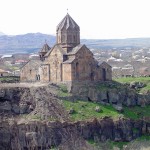 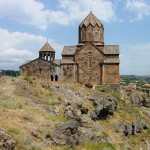 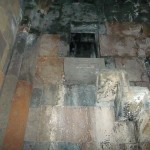 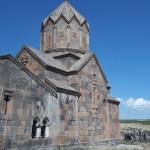 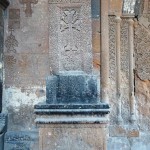 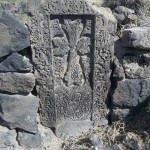 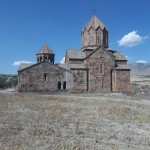 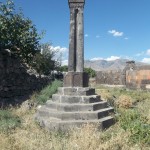 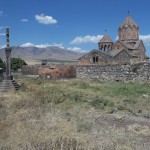 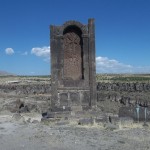 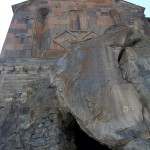 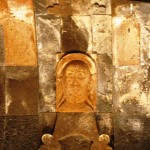 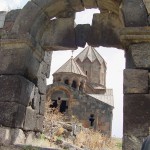 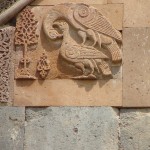