Aghdzk historical and architectural monument complex (state index 2.8.1) was built in the IV century and is located in Aghdzk village of Aragatsotn Region. The complex includes the tomb of kings, a church, monuments, obelisks and fragments of a cross, adjacent and other buildings. According to the testimony of the fifth century Armenian historian Pavstos Buzand (Faustus of Byzantium) in 364 the Persian army during the Persian war eradicated the national consciousness of the idea of the state, destroying the tombs of Arshakuni kings and decided to transfer their bones to Persia. But Commander Vasak Mamikonyan disgracefully defeated the Persian army in Ararat valley and seized the bones of the kings and reburied in Aghdzk habitation. The employees of the Regional Service PHE of Aragatsotn organized an open class and a tour entitled “Recognize our cultural heritage” for the students of T. Terlemezyan secondary school in the area of Aghdzk historical and architectural monuments. Archaeological excavations had not been carried out in the area of the Memorial until the first half of the XX century. In 1973-1975 partial excavation, restoration, rehabilitation, renovation and in 2001-2002 improvement and standardization work were carried out in the territory. In 2015 Complex excavations were resumed. Even nowadays archaeologists are working at the territory of the monument. Among them Mary Safaryan presented the history of the monument, the process of the excavations, talked about the discovered finds and the architectural structure of the monuments. During the event in an interesting atmosphere comprehensive answers were given to the active and multifaceted questions of the students. 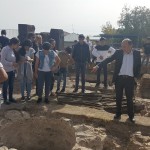 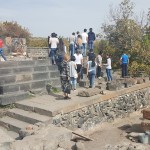 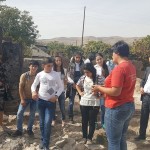