The monastic complex of Haghpat is situated in the south-eastern high-positioned place of Haghpat village, on a plateau. It was founded in 976, during the reign of King Ashot III from the dynasty of the Bagratuni.

A fountain-monument and several small churches are located out of the territory of the complex.

In 1996 the complex was included in the list of the monuments under the protection of UNESCO.

St. Nshan Church — the oldest monument of the complex (911-970) was erected by Queen Khosrovanuysh. The church is situated in the center of the monuments group and belongs to the cross-domed subtype of the domed hall type. Outwardly it is rectangular, inwardly with a cruciform structure and has two-storeyed vestries in the corners. The door is from the west and has a sculpture-decorated frame. Traces of repair works are noticed. This and the other constructions of the monastery were built with bluish, smoothly hewn basalt and inwardly were decorated with frescos. According to a legend, it was erected by architect Trdat.

Later, vestries were adjoined to the church.  After some time the north-eastern vestry was connected with the church by an entrance opened in its western wall. The construction has reached us without essential changes, and only the dome was repaired in the X–XI cc.

Narthex — the big narthex is adjacent to St. Nshan  Church from the west. The narthex was built in the 10th of the XIII c., in the place of the graveyard founded by Princess Mariam in 1185. The narthex has big volumes and is considered one of the most remarkable constructions of the given architectural shape. It is rich in epigraphs.

Only the first layer of the main apse frescos has reached us. On the fresco Christ sitting on the throne is depicted. The scenes of Annunciation, Christ’s birth and Christening were below.

St. Astvatsatsin Church — is situated at the northern side of the fore-church. It is a structure belonging to the central dome-carrying system, outwardly rectangular, inwardly with a cruciform plan and rectangular cross-wings. The entrance door is from the west and has a sculpture-decorated frame.

St. Grigor Church — is located at the southern side of the fore-church; outwardly it is rectangular, inwardly with a cruciform plan and with rectangular cross-wings. The church has an altar with a high stage from the east. The apses of the western side are two-storeyed. The roof is vaulted. It was repaired by Bishop Hovhannes Khachentsi.

The fore-church of Hamazasp — a large hall is situated to the north of the main church. It was called after Bishop Hamazasp who was the abbot of the monastery. It is attached to a small, rectangular chapel-church which has a vaulted gable roof. The construction belongs to the type of narthexes with 4 pillars, a vaulted roof and a garret-window. There is a library adjacent to the southern part of the eastern wall of Hamazasp’s fore-church.

Library ‒ repository of manuscripts — is located on the southern side of Hamazasp’s fore-church. The old building of the library was here in the XI c. It was reconstructed fundamentally in the XIII c. It is a building with a square plan. Its arches, stretching between the pilasters, bear the roof with cross-shapes, creating a dome-section in the center. The dome-section has a small, round garret-window. Outwardly, it has a form of a tent and principally repeats the construction style of the narthex. It is considered one of the most prominent manuscript-writing centers of medieval Armenia.

Belfry — the tower-like, exclusively original, three-storeyed belfry, which is the most remarkable monument of Haghpat Monastery, stands all by itself in the eastern part of the monuments group.

The construction of the belfry is attributed to brothers Hamazasp and Hovhannes who were bishops. The plan of the belfry has a square shape. It is three-storeyed. One can reach the second and third storeys by stone stairs attached to the walls. Outwardly, the cruciform structure of the first storey acquires an eight-faceted border-shape on the second storey. Seven praying apses are located on the first two storeys. The three apses are on the second storey, and the walls of the four apses of the third storey, joining one another in the form of arches, carry on themselves the six-pillared dome-rotunda. The construction is notable for its harmonious proportions and up-soaring structure.

The wall masonry is reinforced with an anti-earthquake belt in the middle part.

Dining-hall — is situated in the northern part of the complex. It is a longitudinal hall which is divided into two similar, garret-windowed parts by two columns, placed along the widening axis. Each part is covered with a system of intercrossing arches. The construction date is unknown.

Narthex — is situated on the western side of St. Nshan Church. Hovhannes Bishop Khachentsi builds the Kyurikyans’ sepulcher (dated at 1161) adjacent to it. Because of the sepulcher construction, the building of the narthex was ascribed to Bishop Khachentsi…

Arch-covered hall — stretches from the west to the east, between St. Nshan Church and the fore-church, afterwards turns to the south between the church and library. The hall was the family mausoleum of the Kyurikyan Bagratuni where high-rank clergymen were buried. The whole floor of the hall is covered with tombstones. The famous Savior cross-stone and a small, old chapel are situated here.

Chapel — is located on the southern roof of the mentioned hall. The construction date and the name of the builder are not known. The chapel is small, has a rectangular plan and a vaulted roof. On the eastern side it has a small altar. The chapel has one donation inscription.

Sepulchers — the territory located between Hamazasp’s building and the library was covered with a vault and was converted into a sepulcher. Its immediate continuation is the passage-like, vaulted 2nd sepulcher, stretching along the eastern length of the church. The tomb-stones of the graveyard are placed in the form of a cobble-floor.

Mausoleums — memorial monuments occupy a peculiar place in the complex. Among them are the three mausoleums of the Ukanants kin, located side by side, near the wall, in the northern part. Those memorial monuments are small, cubic-shaped structures, crowned with beautifully-sculptured cross-stones. 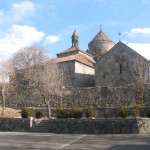 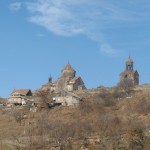 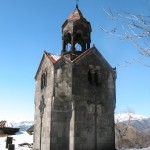 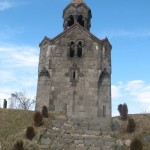 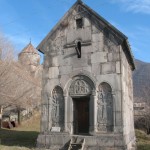 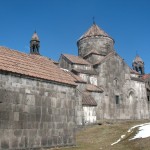 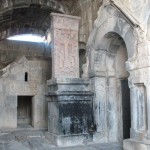 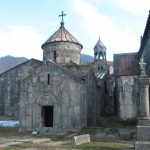