The foundation of Zvartnots Reservation in 1900‒1907 is determined by the initiative of Ejmiatsin’s friar Khachik Archimandrite Dadyan. It is also determined by the exceptional historical-architectural role of the ruins of Zvartnots or St. Gregory the Illuminator Church (constructed in 641‒652) and the adjacent constructions, and by the value of the historical-archeological finds. Zvartnots or St. Gregory the Illuminator Church and the adjoining structures were revealed during the excavations headed by architect Toros Toramanyan, in 1904.

In 1924‒1944 the reservation worked as the archeological site of Zvartnots, in 1944‒1986 as “Zvartnots” Monument-Museum, in 1986‒1989 as “Zvartnots” Historical-Architectural Museum, in 1990‒2003 as “Zvartnots” Historical-Architectural Museum-Reservation. The latter has been working in the structure of the “Service for the Protection of Historical Environment and Cultural Museum-Reservations” SNCO of the Ministry of Culture of Armenia, by the name Branch of “Zvartnots” Historical-Architectural Museum-Reservation, since the June of 2003. It is located in the Province of Armavir, in Zvartnots District of town Ejmiatsin, on the left side of the highway Yerevan‒Ejmiatsin, 15 km. to the west of Yerevan. Directly in front of the entrance of the museum-reservation has been placed a memorial of an eagle, on a high pedestal. The entrance requires payment. The two departments (“Department of Preservation and Exploitation” and “Department of Propagation, Scientific Research and Fund Works”) of the museum-reservation have 20 employees. There are separate studies for the employees in the building of the museum. Excursions in Armenian, Russian and English are organized for visitors in the museum-reservation.

In 1957, according to the decision of the Government of SSRA, the natural-historical environment of the VII c. was restored, the territory was greened, natural-historical environment and a complex of parks were created. Proper conditions for serving the invalid and the blind were created in the territory of the church complex. Reference tableaux (in five languages) as well as a tableau made up in Braille system have been placed in the territory of the monument, by the support of VivaCell MTS. From the spring of 2012 there will be a night service in the monument complex; the monument will appear before the visitors with a beautiful combination of artistic illumination and sound effects.

In 1936‒1937, at the southern side of Zvartnots Church, the museum building of Zvartnots was constructed, by the project of architect Nikoghayos Buniatyan and under the supervision of archeologist Karo Ghafadaryan. The building of the museum was opened on November 7 of 1937. At the beginning it had a small exhibition, formed in one hall which has a surface of 80 square meters. In 1988 the works of enlarging the museum building started, by the project of architect L. Sadoyan. The territory of the building was enlarged almost four times and the decoration works of the museum building ended in 2003. Nowadays the museum has three galleries for exhibition: two galleries are for permanent exhibitions and the one for organizing temporary and mobile exhibitions. In the main and subsidiary scientific funds of the museum, as well as in open exhibitions found their place more than 10 000 units of materials. The most complete materials have found their place in the permanent exhibition.

The author of the first permanent exhibition, organized in the museum in 1937, was archeologist Karo Ghafadaryan, and the author of the second permanent exhibition, organized in the May of 1981, was Vardan Harutyunyan. At the moment, the works of the formation of the third permanent scientific exhibition, corresponding to the criteria of contemporary museum management studies, are in the final stage. Two medieval clay jars (each with a capacity of 500 liters), a round sundial with an Armenian inscription, the inscription “Nerses built it, remember” in Greek letters, left by Catholicos Nerses III, the high-relief of the builder-master with the inscription “Johan”, as well as other ornamented fragments of the church, revealed in the territory of Zvartnots during excavations, found their place in the exhibition. Not only the architecture of the church complex but also excavated materials: multi-colored pottery and examples of jewelry, metal tools, nails and ploughshares are to be exhibited.

In the open-air exhibition are displayed remnants of reinforced and partially restored walls of the ruins of Zvartnots Church, also bases of pillars, shafts, a basket-shaped capital and pillar rows with eagle-sculptured capitals, arches, cornices of lintels, big mortar masses of vaulted overhead covers, a basin for baptism, a well, ornaments left from the church, the palace of the Catholicos, located in the south-western part of the church, the cells for monks, the bath-house, the remnants of the basilica church of the IV‒V cc. and the wine-press, as well as a round slab (with four different small pits and rivulets), found in the territory of the complex during the excavations and dated at II‒I millenniums B.C., the cult phallic-type monument of pre-Christian period, also the cuneiform record of Urartian King Russa II (685-645 B.C.).

The working days and hours of the museum: 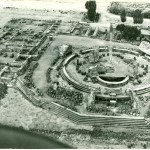 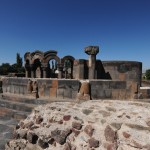 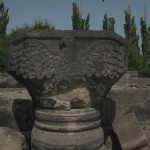 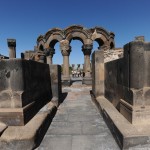 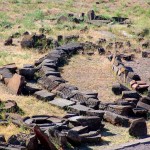 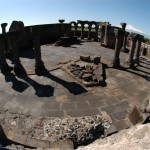