Matenadaran was founded on March 3, 1959 on the basis of Ejmiatsin (then state) depository of manuscripts. It is a scientific research center organizing the preservation and public use of the manuscripts and printed books. It holds one of the world’s richest depositories of the manuscripts and books. The smallest manuscript of Matenadaran is the church caledar (“Tonacuyc”) and the largest manuscript is “Msho charentir”. The building of Matenadaran was designed and built from 1945-1957 (architect Mark Grigoryan). Located on a hill at the end of the Mashtots avenue it dominates the center of Yerevan. It was made of basalt stone; inside the building various types of marble were used. Matenadaran has book depositories, studies, halls, auditoriums and etc. with necessary equipments.

Before the entrance, the sculptures of ancient philosophers, scientists and men of arts decorate the building of Matenadaran with their fine architectural solution. The statues of historical Armenian scholars, Toros Roslin, Grigor Tatevatsi, Anania Shirakatsi, Movses Khorenatsi, Mkhitar Gosh and Frik, were erected on the left and right wings of the building’s exterior . The statues of Mesrop Mashots and his disciple Koriun located below the terrace where the main building stands.

In 1970s an open air exhibition was organized in the vaulted galleries located to right and left sides of the main building. The details of the Armenian architecture and khachkars are exhibited there.

In 2012 on the slope of the right plateau the new building of Matenadaran was launched tune with the times (architect Artur Meschyan). 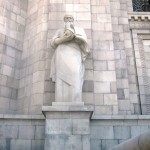 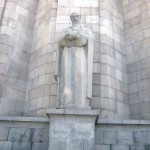 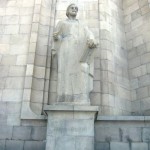 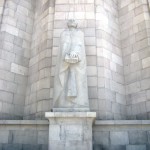 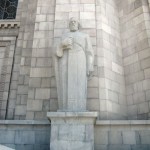 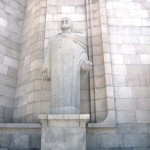 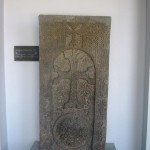 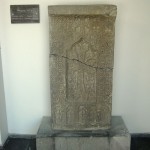 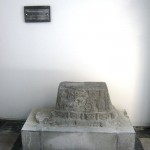 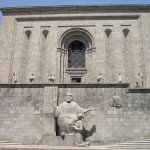 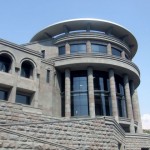 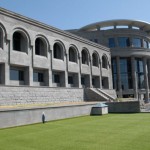 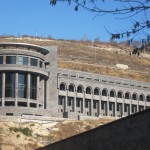