THE CATHOGHIKE CHURCH OF AVAN

THE CATHOGHIKE CHURCH OF AVAN

THE CATHOGHIKE CHURCH OF AVAN
the District of Avan,
state index N 1.2.10

It is situated in the north-eastern District of Avan, in Yerevan. Avan is mentioned as an urban settlement in the VI c. In 588-602 the church was the anti-See of the Catholicos’s residence of Dvin. The church was erected in 951, by the anti-See Catholicos Hovhan Bagarantsi of that part of Armenia which was under Byzantium’s rule. The church is a central-domed construction, outwardly rectangular, inwardly four-apsidal, with a circular plan in the four corners, with domed sacristies which are connected with the praying hall by the niches of the three-quarter section of the circle. It was built with local tuff stones, hewn smoothly, and had a modest decoration. The western pediment-decorated, arched portal attracts the on-lookers’ attention. The Cathoghike of Avan is an ancient sample of Hripsime-type churches. The residence of the Catholicos is adjacent to the Cathoghike from the north. The residence is connected with the church by the entrance, opened in the northern apse. In 602 Persian King Khosrov II Parvez occupied Avan and afterwards converted the Cathoghike into a monastery. The anti-See Catholicos Hovhannes Bagarantsi, who died in 611, was buried on the southern side of the Cathoghike of Avan. In 1679 the residence complex of the Catholicos was ruined as a result of an earthquake. In 1940 the territory of the Catholicos’s residence was excavated, the western and eastern fronts were repaired. In 1978 the palace building of the Catholicos was excavated, the southern façade of the Cathoghike was restored.

Toramanyan T., Materials on the History of Armenian Architecture, Yerevan, 1942.

Marutyan T., The Church of Avan and Similar Monuments, Yerevan, 1976.

The church from different positions 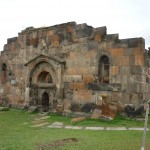 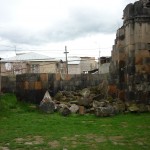 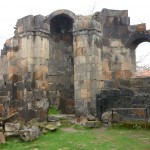 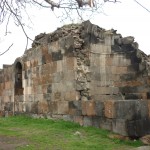 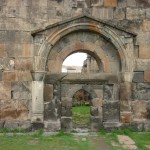 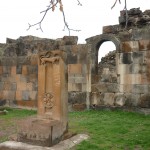 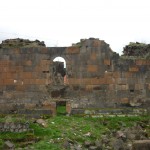